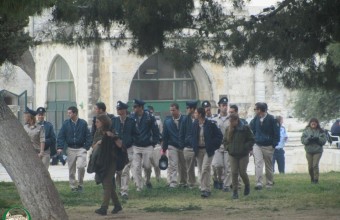 Israeli settlers Sunday resumed their provocative tours into al-Aqsa Mosque compound, in Jerusalem, despite of recent remarks made by Israeli Prime Minister Benjamin Netanyahu, by which he vowed that ‘his’ government will not change the status quo at the compound, according to local sources.WAFA correspondence reports that groups of Jewish settlers, accompanied by a police escort, entered the site through the Moroccan Gate, before they were confronted by Palestinian worshipers who chanted religious slogans to protest their entry.

The news comes amid intensified presence of outdoor students and Islamic Waqf personnel who barricaded themselves inside the compound to confront illegal Jewish entry to the Islamic holy site.

Since the beginning of October 2015, tension has been running high across the West Bank, including Jerusalem and Gaza, against the backdrop of Israel’s repeated assaults on the mosque, including its unilateral enforcement of a temporal division between Muslims and Jews.

Prior to unrest in early October, the Euro Mediterranean Human Rights Monitor pointed out in a report that Israeli incitement and violations against Arabs in Jerusalem have increased dramatically in 2015.

Since the beginning of unrest on early October 2015, 72 Palestinians have been killed and over 2,270 others injured with live ammunition or rubber-coated steel rounds used by Israeli forces in the West Bank and Gaza.

Over 3,000 Palestinians sustained suffocation due to intensive use of teargas and toxic gas by Israeli forces.