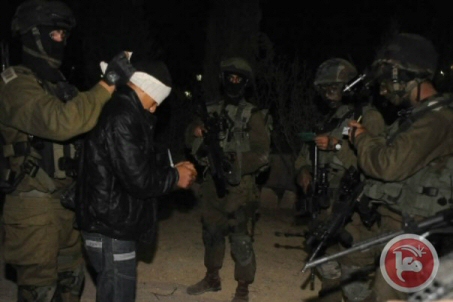 Israeli soldiers then ransacked the home of the village’s mayor, Hussein Abu Reida, 55, and detained him along with his son Tariq, 33.

It is fairly common practice for Israeli forces to detain Palestinian Authority officials and Palestinian lawmakers.

On Oct. 20 Israeli forces detained a Hamas-affiliated lawmaker Hassan Youssef from his home in Beitunia west of Ramallah during a predawn raid.

The Israeli army said in a statement that Youssef had been ‘actively instigating and inciting terrorism and publicly encouraging and praising the execution of attacks against Israelis.’

As of September, four members of the Palestinian Legislative Council were being held in Israeli prisons, including Khalida Jarrar, a Palestinian leader affiliated with the Popular Front for the Liberation of Palestine,according to prisoners’ rights group Addameer.

Jarrar was detained from her home in Ramallah in April, and initially sentenced to six months administrative detention, although international pressure later forced the Israeli authorities to bring 12 charges against her, focused on her political activism.

Her case has brought outcry across both Palestine and Israel, with Palestinian and Israeli rights groups calling for her release.

Addameer described her arrest as ‘vengeful, arbitrary and political, with an aim to punish her for her political opinions and activism for Palestinian human rights,’ while Human Rights Watch has said ‘her case is rife with due process violations.’