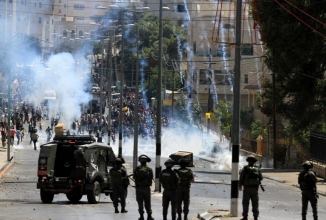 The Bethlehem branch of Red Crescent Society (RCS) said the two received treatment for their wounds, and many Palestinians suffered the effects of tear gas inhalation.

Army forces also clashed with local Palestinians and students outside a school al-Khader.

Soldiers also targeted a vehicle belonging to al-Khader municipality with rubber-coated rounds. However, there were no reports of casualties.

According to the Ministry of Health, 73 Palestinians have been killed and over 2,270 others injured with live ammunition or rubber-coated steel rounds used by Israeli forces in the West Bank and Gaza since the beginning of unrest in early October 2015.

Over 3,000 other Palestinians sustained suffocation due to intensive use of teargas and toxic gas by Israeli forces.

Earlier Sunday, A Palestinian was fatally shot by the Israeli army at Beit Anoun junction to the east of Hebron.

A Palestinian, whose identity remains unknown until the moment and according to witnesses was nowhere near the scene of the clashes, was shot and left to bleed to death by the Israeli army soldiers, who claimed the Palestinian ran toward them with a knife-wielding hand in an attempt to stab them.