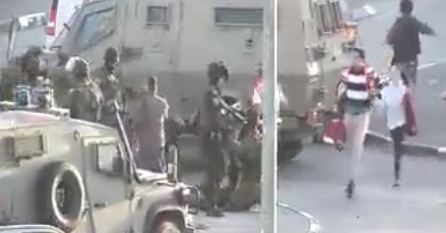 A large Israeli military force invaded, on Sunday evening, the al-Fawwar refugee camp, south of the southern West Bank city of Hebron.Media sources in Hebron said the soldiers invaded various neighborhoods in the refugee camp, and clashed with local youths who hurled stones and empty bottles on them following the invasion.

The soldiers fired live rounds and rubber-coated steel bullets; no injuries were reported.

In related news, the soldiers intensified their siege on the Sa’ir town, north of Hebron, after fully sealing all of its entrances, preventing the Palestinians from entering or leaving it.

The closure of Sa’ir came after three Israeli soldiers were injured near Beit Einoun Junction, east of Hebron, after a Palestinian vehicle rammed into them.

The Israeli military conducted an extensive search campaign, looking for the driver, but could not locate him until he turned himself in to the army at the District Coordination Office.

He has been identified as Ahmad Yaqeen al-Ja’fary, 20 years of age. The army moved al-Ja’fary to an interrogation center.