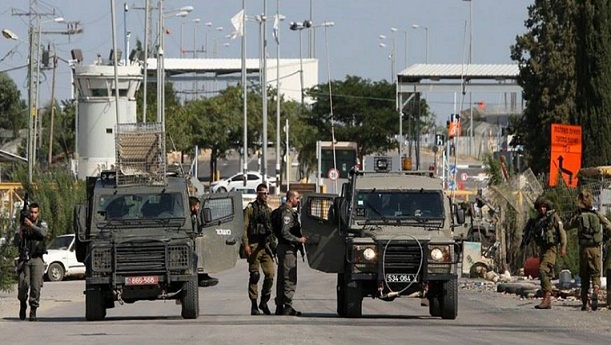 Dozens of Palestinians have been injured, Tuesday, during clashes with Israeli soldiers invading communities in the northern West Bank district of Tulkarem, and the central West Bank district of Ramallah.The Palestine TV has reported that the soldiers, stationed near the Annexation Wall Gate, west of Shweika area, north of Tulkarem, fired dozens of gas bombs and rubber-coated steel bullets, at hundreds of Palestinians, marching against the ongoing Israeli violations, and escalation.

A Palestinian activist, identified as Khaled Mansour, was shot with two rubber-coated steel bullets in his leg and abdomen, and Mirvat Abu Shanab, secretary of Palestinian Democratic Union, was shot in her leg, while scores of residents suffered the effects of tear gas inhalation.

The procession started in front of the Red Cross in Tulkarem, after the residents held a protest in front of the building in solidarity with the political prisoners, held by Israel, and against the escalating violations and crimes.

Many international activists also participated in the protest, also expressing their rejection to Israel’s construction and expansion of its illegal colonies in occupied Palestine.

In related news, scores of residents suffered the effects of tear gas inhalation, after the soldiers assaulted a procession that took off from Betunia town, near Ramallah, heading towards the Ofer Israeli Prison.

Eyewitnesses said the soldiers used excessive force, and fired dozens of gas bombs on the protesters.

In addition, soldiers kidnapped Omar al-Farouq Nasser Obeydiyya, a teaching assistance of the Physics Department in Birzeit University, in the Ramallah district, after violently assaulting him, causing various cuts and bruises.

On Tuesday at dawn, dozens of Israeli soldiers invaded Hebron, before breaking into the al-Huriya Radio and violently searching it, causing significant property damage, and ordered the radio shut for six months.