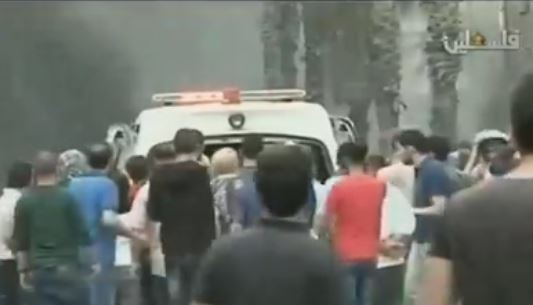 Israeli soldiers invaded, Tuesday, various villages and towns in the southern West Bank district of Hebron, wounded several Palestinians, including schoolchildren, and kidnapped two residents. Schools in Surif town near Hebron, had to shut down due to ongoing invasions, and gas bombs fired by the soldiers. Mohammad Awad, spokesperson of the Popular Committee against the Wall and Settlements in Beit Ummar, north of Hebron, said the soldiers invaded the town, and clashed with local youths in the Safa Junction area.

The soldiers fired several rubber-coated steel bullets and gas bombs on the protesters, wounding four Palestinians, while many others suffered the effects of tear gas inhalation.

The soldiers also placed sand barriers on the southern entrance of Bani Neim town, east of Hebron, and closed the iron gate of the main entrance of Doura town, in addition to installing a military roadblock closing the al-Fawwar refugee camp.

Clashes took place between the invading soldiers and local youngsters, who hurled stones and empty bottles on them, while the army fired live rounds, rubber-coated steel bullets and gas bombs. Many Palestinians suffered the effects of tear gas inhalation.

In related news, soldiers stationed on the al-Jalama roadblock, northeast of the northern West Bank city of Jenin, kidnapped a Palestinian child identified as Jamal al-Mohr, 16 years, and took him to an unknown destination.

Another Palestinian, identified as Saed Emad Mohammad Sleibi, 19, was kidnapped on the Jaba’ military roadblock, near Jenin, while heading to work. Sleibi is a former political prisoner.

On Tuesday at dawn, dozens of Israeli soldiers invaded Hebron, before breaking into the al-Huriya Radio and violently searching it, causing significant property damage, and ordered the radio shut for six months.