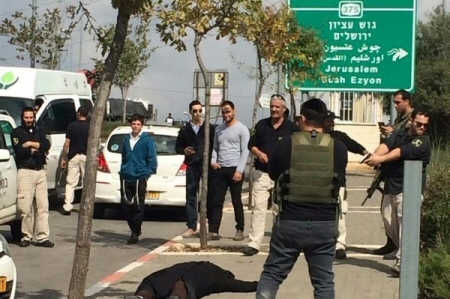 An Israeli security guard, on Sunday, shot a Palestinian woman following an alleged stabbing attack at the entrance to the illegal Israeli settlement of Beitar Illit, near the Gush Etzion settlement bloc in the southern occupied West Bank, an Israeli army spokesperson said.Israeli media initially reported that the Palestinian woman was shot and killed, however an Israeli Red Star of David medical spokesperson told Ma’an News Agency that the woman was shot and injured, and her condition is still unknown.

The security guard was lightly injured during the incident, an Israeli army spokesperson said.

Security footage believed to show the stabbing emerged on social media shortly after the incident, which shows a woman pull a knife from her purse and lunge at a security guard.

The footage does not show the shooting of the woman, identified by family as Hilwa Salim Darwish, from Husan village west of Bethlehem.