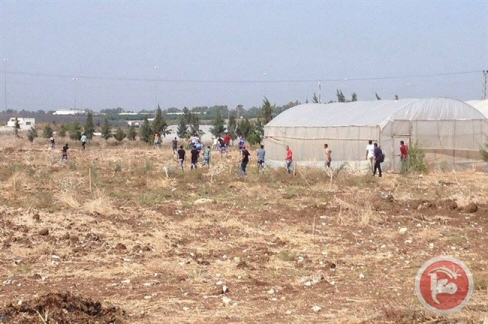 Israeli forces shot and injured at least five students with live bullets, on Monday, at the northern occupied West Bank’s Palestine Technical University in the Tulkarem district, a spokesperson for the Red Crescent said.Thirteen other students were injured with rubber-coated steel bullets and 50 were treated for severe tear-gas inhalation, as Israeli forces raided the university’s campus library and the engineering department.

During the raid, clashes broke out between students and fully-armed Israeli forces, according to M’an News Agency.

In total the Red Crescent documented at least 70 injuries to students.

The administration of the university evacuated the campus, sending students home early, in fear for its students’ safety.

The spokesperson said Israeli forces responded with ‘riot dispersal means’ including rubber-coated steel bullets, however the spokesperson denied that live fire was used.

According the Israeli army spokesperson, the clashes in the area are ongoing.

Students of the Palestine Technical University have organized frequent marches throughout October and into November in protest against Israeli violations and raids on the university’s campus. When Israeli forces show up to suppress the marches, clashes break out.

According to campus administrators, Israeli forces have been positioned in a camp they set up inside the university’s campus where forces often use the position to fire bullets and tear-gas at protesting students.
Since the start of October, clashes between Palestinian youth armed with rocks and Molotov cocktails and Israeli army forces in the occupied West Bank and Gaza Strip have occurred daily.

In October alone, the Red Crescent documented that Israeli forces shot and wounded at least 760 Palestinians with live rounds across the occupied Palestinian territory, while another 1,857 were hit with rubber-coated steel bullets.

In addition, 5,399 Palestinians were treated for excessive tear gas inhalation during the period, while another 246 were injured in other ways, including assault by Israeli soldiers and burns from tear gas canisters.

According to the society’s records, the total number of Palestinians injured last month was around 8,262.
For most parts of the occupied Palestinian territory, October was also the deadliest month since the Second Intifada.