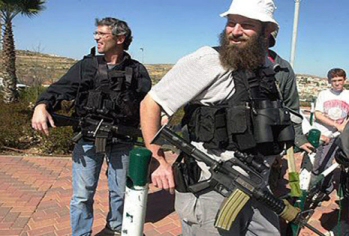 An extremist Jewish Israeli settler opened fire, Monday morning, on Palestinian farmers in the West Bank city of Nablus.“The Palestinian farmers were working at their farm when an extremist Israeli Jewish settler from the illegal Jewish-only settlement of Ma’ale Levona stepped out of his car holding an automatic gun machine,” activist Ghassan Daghlas said, according to Days of Palestine.

“He placed his gun at the back of his car, turned it towards the Palestinian farmers and opened fire,” Daghlas added.

According to Daghlas, the farmers fled without being harmed. Palestinian medical sources confirmed that there were no casualties.

Settler violence has been dramatically rising since the arson attack on the Dawabsha family in Nablus, around two months ago.

Last month, Israeli settlers were seen in a video went viral on social media rolling boulders and burning tires down West Bank hills towards Palestinian farms, burning and damaging them.