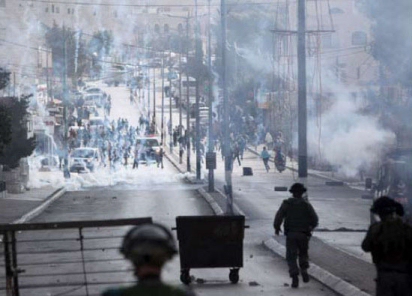 Israeli violations of international law and international humanitarian law in the oPt continued during the reporting period (05 – 11 November 2015).Israeli attacks in the West Bank & Gaza:

On 05 November 2015, Israeli forces deployed in the vicinity of ‘Gosh Etzion’ settlement, south of Bethlehem, opened fire at Malek al-Sharif (24), from Hebron, while being present near a bus stop on bypass road (60), due to which, he was killed. Israeli forces claimed that the aforementioned person attempted to carry out a stabbing attack.v

On 06 November 2015, Israeli forces opened fire at a vehicle with a Palestinian registration plate while passing by a gas station at the northern entrance to Hebron. As a result, the driver namely Sarweh al-Sha’rawi (72), from the city, was killed. She was taken to an unknown destination and was pronounced dead later.

On 08 November 2015, Israeli forces stationed at Za’tara checkpoint, south of Nablus, shot dead Suleiman Shaheen (22), from al-Bireh. Israeli websites stated that once a Palestinian, who was driving a vehicle, approached a bus stop at Za’tara checkpoint, he drove fast towards a group of settlers at the bus stop. As a result, 3 of them were wounded. Wounds of 2 of them were serious. However, Israeli forces shot him dead.

On 09 November 2015, Israeli forces stationed at ‘Eliyahu’ crossing, southeast of Qalqilya, shot dead Rasha Ewaisi (23), from the city. Israeli forces declared, ‘A young woman approached the aforementioned crossing. When Israeli forces asked her to stop several times, she refused, due to which she was shot dead.’

On 10 November 2015, Israeli settler security guards opened fire at Mohammed Nemer (37), from al-Eisawiya, northeast of occupied Jerusalem, while walking on al-Mesrara Street, opposite to al-Amoud Gate in the Old City. As a result, he sustained several bullet wounds, due to which he was taken to Hadassa-Ein Kerem Hospital, where he was pronounced dead. Israeli forces claimed that Nemer was following the guards and hurried up trying to stab one of them, but both of them directly responded. They opened fire at him and neutralized him. Owners of stores in al-Mesrara neighbourhood refuted the Israeli story.

At approximately 15:50, Israeli forces stationed at the ‘Container’ military checkpoint, northeast of Bethlehem, opened fire at Sadeq Gharbiya (16), from Sanour village, south of Jenin, under the pretext that he hurried up towards the Israeli soldiers trying to stab someone. As a result, he fell to the ground covered in blood before he passed away.

During the reporting period, 105 Palestinian civilians in the West Bank, including 49 children; two of whom were wounded in occupied East Jerusalem.

The Palestinian civilians wounded in the West Bank were as follows:

In the Gaza Strip, Israeli forces killed a Palestinian civilians and wounded 19 others; including a paramedic. Fourteen of them were hit with live bullets, 2 were hit with rubber-coated metal bullets and 3 others were hit with tear gas canisters. Moreover, dozens of civilians suffered tear gas inhalation.

On 06 November 2015, Israeli forces stationed along the border fence between the Gaza Strip and Israel, east of Khan Yunis, south of the Gaza Strip, opened fire at dozens of Palestinian youngsters throwing stones at the Israeli soldiers. As a result, Salama Abu Jame’ (23), from Bani Suhaila village, was killed with a live bullet to the chest.

The Palestinian civilians wounded in the Gaza Strip were as follows:

On 11 November 2015, Israeli gunboats opened fire around Palestinian fishing boats sailing of al-Waha resort, northwest of Beit Lahia village, north of the Gaza Strip, but no casualties were reported.

Concerning airstrikes, on 09 November 2015, Israeli warplanes launched 2 missiles at a training site for al-Qassam Brigades (the armed wing of Hamas movement), near al-Hashash neighbourhood, northwest of Rafah, south of the Gaza Strip, but no casualties were reported.

During the reporting period, Israeli forces conducted at least 57 military incursions into Palestinian communities in the West Bank and 17 ones in occupied East Jerusalem. During these incursions, Israeli forces arrested at least 118 Palestinian civilians, including 27 children and 2 women. Twenty-seven of these civilians, including 17 children and the 2 women, were arrested in East Jerusalem.

During the reporting period, Israeli forces raided houses belonging to families of Palestinian accused of carrying out stabbing and run-over attacks. They verbally threatened the families to demolish their houses within a week. Moreover, they raided the office of the Islamic Charitable Association in al-Shyoukh village, east of Hebron, and confiscated its contents.

In the Gaza Strip, on 05 November 2015, Israeli forces moved about 100 meters to the west of the border fence, east of al-Qarara village, northeast of Khan Yunis, south of the Gaza Strip. They levelled lands for few hours and withdrew later.

Israel has continued its settlement activities in the oPt, a direct violation of international humanitarian law, and Israeli settlers have continued to attack Palestinian civilians and property.

· At approximately 06:30 on Tuesday, 10 November 2015, Israeli forces accompanied by bulldozers and diggers moved into agricultural lands adjacent to Te’nek village, northwest of Jenin, which are part of Marj Ebn Amer plain. They deployed in the fields, where the bulldozers and diggers started bridging water wells under the protection of Israeli forces. An hour later, Israeli forces withdrew and no further incidents were reported. The water wells that were demolished belong to Emad Isma’il Jaradat (53), Suleiman Salman Zyoud (37), No’man Yusef Ahmed Jaradat (44). The aforementioned persons are all from Silet al-Harithiya village, northwest of Jenin.

· At approximately 10:00, on the same day, Israeli forces accompanied by Civil Administration officers moved into al-Qarn area, south of Beit Ommer village, north of Hebron. They confiscated 1,000 bricks from a house belonging to Zeyad Mohammed Yusef Abu Ayash under the pretext of non-licensing.