Israeli Army Blows Up Three Homes In Nablus, One In Ramallah 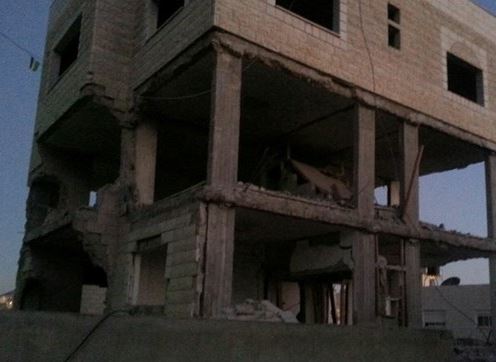 Israeli soldiers invaded on, Saturday at dawn, the northern West Bank city of Nablus, and detonated bombs in two homes of detainees who were accused of killing an Israeli settler and his wife, near Beit Forik in the northern West Bank district of Nablus, several months ago. The soldiers also demolished a home in Ramallah.The soldiers invaded the house of detainee Karam al-Masri, forced the family out, and wired the property before detonating a bomb, destroying its interior.

The soldiers also forced the residents of nearby homes out of their properties, and held them in one room belonging to one of the neighboring families, before exploding al-Masri’s home.

The army also fired several gas bombs at residents who gathered in the area, causing an 80 year old woman to suffer the effects of tear gas inhalation while in her own home.

Clashes took place following the invasions and detonations; the soldiers shot two residents with live rounds and seven others with rubber-coated metal bullets. In addition, many residents suffered the effects of tear gas inhalation. One Palestinian was also injured after the soldiers rammed him with their jeep.

In addition, at least fifty Israeli military vehicles invaded Silwad town, east of Ramallah, and invaded the home of Moath Hamed, after declaring the surrounding area a closed military zone. Hamed is currently imprisoned by the Palestinian Authority.

Prior to destroying the property, the army invaded all nearby homes, and removed the families, forcing them to remain in a classroom in a nearby elementary school for boys.

The Israeli Authorities issued an order to demolish the property several months ago, but the order was held by the Israeli High Court, until the Court eventually gave a green light for the army to destroy the property.

Moath’s father built the property nearly 40 years ago, and following his death, the property was inherited by 16 family members.