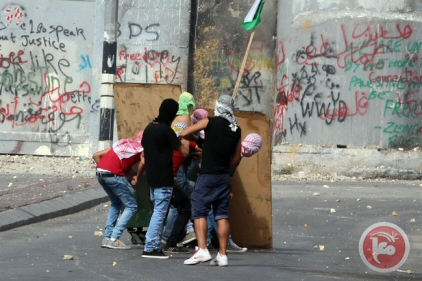 Two Palestinians were shot and injured with live bullets, while three others were injured with rubber-coated steel bullets during clashes in Bethlehem, on Tuesday, the Palestinian Authority Ministry of Health said.The ministry said two protesters were shot with live bullets, in their lower extremities, while one of those shot with a rubber-coated steel bullet was hit in the face.

The conditions of the five are unknown.

An Israeli army spokesperson said, regarding the clashes, that, ‘a riot of dozens of Palestinians,’ threw rocks at Israeli forces, who, ‘in attempt to prevent the escalation of violence, used riot dispersal means.’

Clashes at the northern entrance of Bethlehem have been a nearly daily occurrence since the start of October, amid increased tensions in the area, Ma’an News agency reports. Rights groups have long criticized Israel’s excessive use of force when responding to demonstrations in the occupied Palestinian territory.

In the West Bank, the UN Office for Humanitarian affairs reported that the total number of Palestinian injuries from Oct. 1 to Nov. 9 alone had far surpassed the total number injured during the whole of 2014.

Over 7,000 Palestinians have been injured since the start of October, and 83 have been killed.