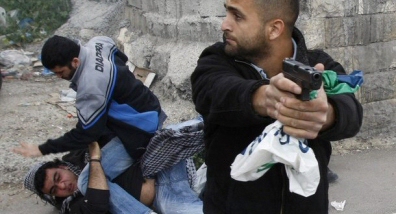 In a series of repeated brutal attacks against Palestinians, Israeli soldiers dressed as Palestinian civilians (Musta’ribeen), this morning, have kidnapped three schoolchildren from Damascus Gate, East Jerusalem.Wadi Al-Hilweh Information Center said that the agents infiltrated a street in the area where students were heading to school.

The Musta’ribeen then opened random fire into the air and the children began running.

Backed by Israeli soldiers, the agents attacked three of the children, put them into a military jeep and drove to an unknown destination.

Clashes erupted following the shooting and the frenzy created by the kidnapping.

PNN reports that, during the past week, many children from Jerusalem have testified to being attacked and kidnapped by the Musta’ribeen, who blindfolded them, attacked them and, then, drove them to a far-away destination.

However, this is not a one-time happening.

Attacks by the Musta’ribeen Unit, AKA Death Unit, have been well-known in the Palestinian struggle for years. Their use was intensified in the clashes which have been erupting since the beginning of October, so as to infiltrate protesters and make it easier to kidnap them.

Last Thursday, members of the unit broke into Al-Ahli hospital in Hebron, kidnapped a patient, Azzam Shalaldeh (21), and executed his cousin in the surgery room, Abdullah Shalaldeh (27).

The soldiers were wearing the Kufiyyeh (Palestinian scarf) and one of them was dressed as a pregnant woman going into labor, and they had a wheelchair with them too.