Soldiers Kidnap 10 Children, 2 Journalists And A Young Man, In Jerusalem 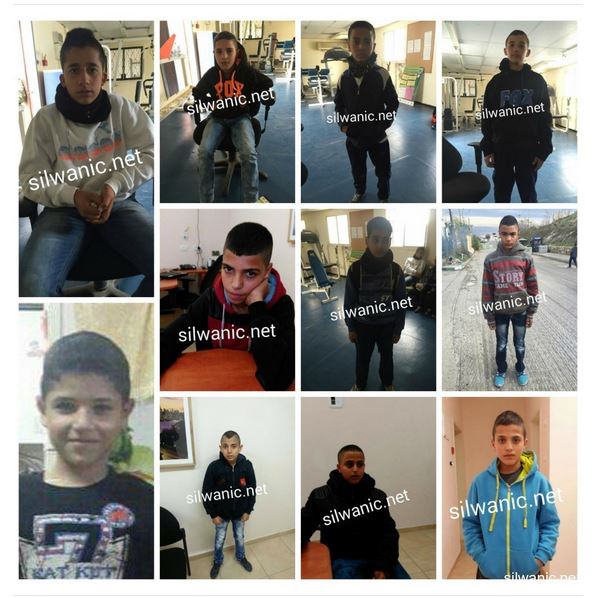 Israeli soldiers, and undercover units, have kidnapped on Tuesday ten Palestinian children, between the ages of 9 and 13, in addition to two journalists and a young man, in occupied East Jerusalem.The Wadi Hilweh Information Center in Silwan (Silwanic), in occupied Jerusalem, has reported that the soldiers kidnapped the following children:

Some of the children were taken prisoner by undercover soldiers, who invaded the Schools Street in Ras al-‘Amoud in Silwan, and fired rounds of live ammunition, before chasing several students heading to school.

Lawyer Mohammad Mahmoud managed to visit the kidnapped children in the Police Station in Jabal al-Mokabber, and said that they were been beaten by the undercover soldiers, and were held in an illegal colony in Ras al-‘Amoud for several hours without access to food or water.

The soldiers later moved the children to an interrogation center, where they remained without food or water, and were beaten again.

Mahmoud said that some of the kidnapped children were walking to school when the soldiers chased them, and pushed them onto the ground before berating them up, cuffing and blindfolding them.

Nabil Mazin al-Khatib, 9, was kidnapped after the soldiers invaded his home and searched it. The soldiers claimed he hurled stones on a settler’s car.

Three of the kidnapped children, (Tamer Khalifa al-Maghrabi, Yazan Anwar Salfiti, from at-Tour, and Mohammad Mohannad Odah, from Silwan) were kidnapped in the interrogation facility in Jabal al-Mokabber; the soldiers earlier stormed their homes and summoned them for interrogation.

In related news, the District Court in Jerusalem ordered Ahmad Nidal Abu Ebeitan, 12 years of age, under further interrogation. He was kidnapped from after the soldiers invaded his home in the at-Tour town, on Monday.

Also on Tuesday, the soldiers kidnapped two photojournalists, identified as Mustafa al-Khatib and Eyad at-Tawil, and a young man identified as Bashar Abu Shamsiyya, in Jerusalem’s Old City, and took them to an interrogation center.