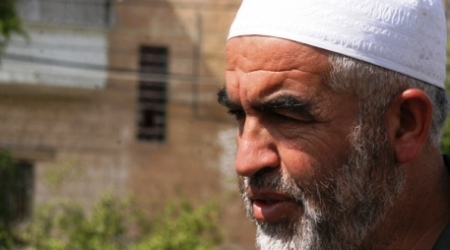 The security cabinet of the Israeli occupation announced a decision to outlaw the northern branch of the Islamic Movement, in the pre-1948 occupied Palestinian territories’, Netanyahu’s office announced on Monday night.The announcement stated, according to Al Ray, that any organization or individual belonging to the northern branch or found assisting the organization in any way will be considered as committing a criminal offense and will be subject to imprisonment.

The announcement gives the government permission to confiscate all land belonging to the organization.
Israeli sources quoting Netanyahu said that the Cabinet decision was made after a series of discussions with all the relevant legal and security advisers.

Police summoned the leaders of Islamic movement for interrogation, among them Raed Salah and Kamal al-Khateeb.

An Israeli senior official noted that the Cabinet decided to outlaw the northern branch of the Islamic Movement two weeks ago. He said that ministers agreed to let the both prime minister and defense minister make the decision on when to publicize the news, in line with security officials. The official noted that the police and Shin Bet domestic security asked to delay the official announcement for two weeks, to complete an operational deployment, the night after police and Shim Bet raided the northern branch offices.

The decision was announced even though Shabak oppose it, explaining that banning the Islamic movement will force it to work secretly, which will increase its dangerous impacts.