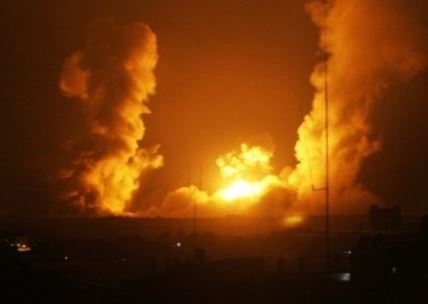 Israeli soldiers shot and moderately injured, on Tuesday evening, a young Palestinian man, east of the al-Boreij refugee camp, in central Gaza. Israeli army and navy ships fire shells and live rounds into different parts of the coastal region.Medical sources said clashes took place near the border fence, in central Gaza, between many Palestinians who hurled stones and empty bottles on military vehicles and watch towers across the border fence, and Israeli soldiers who fired live rounds, gas bombs and rubber-coated steel bullets.

One Palestinian was shot with a live round in his leg, and was moved to the Al-Aqsa Hospital in Deir al-Balah, suffering a moderate injury.

In addition, Israeli navy ships fired two shells into an area, west of Gaza City, causing damage but no injuries.

The navy also fired several live rounds on Palestinian fishing boats in the Sudaniyya Sea, northwest of Gaza City, forcing the fishers back to shore.

In related news, Israeli soldiers stationed across the border fence, east of Khan Younis, in the southern part of the Gaza Strip, fired several live rounds into Palestinian agricultural lands east of the city.

The Israeli army said it struck two targets in Gaza, allegedly “after rockets were fired from Gaza, and landed near the border fence,” and that the ‘shells did not cause the rocket sirens to sound.’

The army added that the targeted sites are run by the al-Qassam Brigades, the armed wing of Hamas.

Earlier on Tuesday, Israel claimed that the al-Qassam fired shells into two kibbutzim close to the border, and later denied its own report.

Israeli daily, Haaretz, said the Iron Dome system launched an interception missile after mistaking a bullet for a missile.