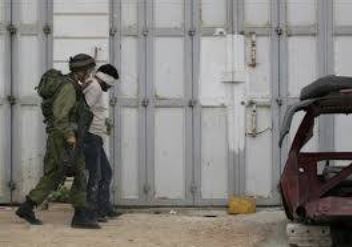 Israeli soldiers invaded, on Sunday at dawn, the West Bank city of Bethlehem, and Beit Fajjar nearby town, kidnapped two Palestinians and summoned another resident for interrogation. The soldiers completely isolated Aqraba village, south of Nablus, summoned a father and his teenage son, from Barta’a village.Eyewitnesses said the soldiers kidnapped Ahmad al-Hreimi, only 17 years of age, from Bethlehem city, after the army stormed and ransacked his family’s home, and took him to an unknown destination.

The soldiers also stormed a pharmacy in the Manger Square in Bethlehem, and confiscated surveillance tapes.

Yousef Deeriyya, member of the Popular Committee against the Wall and Settlements, said the soldiers started their closure of the village two days ago, in addition to shooting two Palestinians with live fire on its main entrance.

The soldiers summoned Mohammad al-Hajj Mahmoud Qabaha, 52, and his son ‘Orwa, 16 years of age, for interrogation in the Huwwara military base, after the army searched and ransacked their home.

Late on Saturday at night and on Sunday at dawn, the army carried out massive invasions into hundreds of Palestinian homes, in the Hebron district, in the southern part of the occupied West Bank, and kidnapped at least 19 Palestinians.