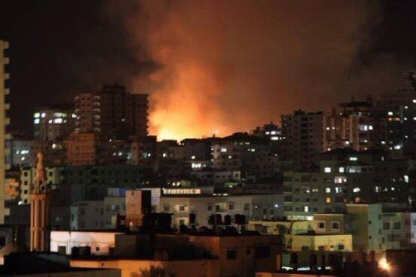 The Israeli army, on Tuesday, continued to breach the truce agreement reached between the Palestinian-Israeli sides under the Egyptian auspices, earlier in August 2014, launching an airstrike on a site in central Gaza Strip, however, no injuries were reported.According to WAFA correspondence, Israeli F16 warplanes fired at least two missiles targeting a location near the entrance of al-Maghazi refugee camp, resulting in its destruction.

Reconnaissance drones reportedly hovered over Gaza at low altitudes throughout the night hours, until dawn, amid the firing of flares and thermal bombs.

The attack came in response to a missile that was allegedly fired from Gaza, toward an area in southern Israel.

On November 18, 2015, Israeli warplanes carried out four airstrikes on multiple targets in the Gaza Strip, in yet another act of aggression against the besieged coastal territory. There were no reports of casualties.

Israel and the Palestinian factions inked a ceasefire deal on August 26, ending the latest deadly Israeli onslaught on Gaza that claimed the lives of over 2,200 people, overwhelmingly civilians.

In 2014, Israel launched a war on Gaza which claimed the lives of about 2,200 Palestinians, and left more than 10,000 injured. Hundreds of thousands others are currently displaced and live in makeshift caravans or in UNRWA-run schools.

Since 2007, Israel has imposed a blockade on Gaza, which has caused a serious decline in the standard of living, poverty and unprecedented levels of unemployment.