Five Resolutions in Favor of Palestine Approved by UN 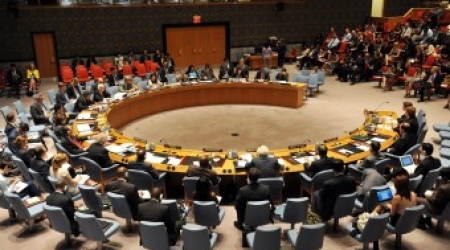 The overwhelming majority of General Assembly of the United Nations, Wednesday, voted on five draft resolutions in favor of Palestine. The decision comes after the Assembly discussed the two articles, ‘the Palestinian Cause’ and ‘the Conditions in the Middle East.’According to Al Ray, the first resolution was entitled, ‘Using Amicable Methods to Resolve the Palestinian Cause’. The voting results were 148 in favor to 6 against, with 8 abstentions.

The fourth resolution was entitled ‘Committee for Palestinians Right to Exercise Ownership of Their Inalienable Rights.’ The voting results were 94 in favor to 7 against, with 56 abstentions.

The last resolution, entitled, ‘The Section of Palestinians Rights in the Secretary-General of UN’, passed with 91 votes in favor to 7 against, with 59 abstentions.

After the voting process, Permanent Observer of Palestine to the United Nations, Riyad Mansour, gave a speech to show his gratitude and thanks to the member countries of the UN for their initial stand, and their votes in favor of the resolutions that show their support to the Palestinian cause.

Mansour added that the international community represented by the United Nations’ protection of international law is a source of comfort and support to the Palestinian people. It will help them in their continuing journey of resisting and striving to maintain their inalienable rights, and bringing an end to the Israeli occupation, which will liberate the state of Palestine and its capitol of East Jerusalem, and fulfill the two-state solution.

The ambassador also affirmed the importance of the resolutions approved by the UN concerning Palestine, saying that what affects the credibility of the United Nations is not as some claim, the adoption of these resolutions but the nonexistence of a necessary political will to force Israel to show respect to these resolutions and apply it.