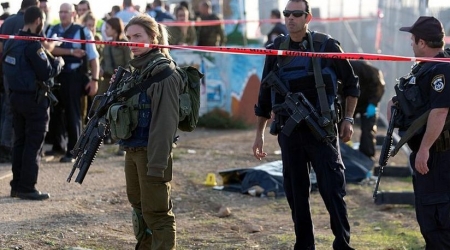 Israeli human rights center, B’Tselem, is holding PM Benjamin Netanyahu’s government responsible for the committing of field executions against Palestinians by both Israeli forces and civilians. The director general of the center, Hagai Elad, said that the Israeli government encouraged Israeli forces to act as judge or executioner and to shoot Palestinians dead, even after apprehending them.

Elad noted that the security camera footage shows Israeli police shooting both Hadil and Nurhan Awad as they lay motionless on the ground. The footage shows that an Israeli civilian knocked Nurhan to the ground before being shot.

He also noted the incident in which Ashraqet Qatnani, aged 16, was shot dead by Israeli soldiers after being run over by Gershon Mesika, the former head of the Shomron regional council. Gershon confirmed that the soldiers shot her dead even though she was posing no danger to anyone.

The center reported, according to Al Ray, that Israeli ministers and other politicians, as well as top military and police officers, openly encourage civilians to shoot and kill any Palestinian suspected of assaulting Israelis, regardless of the extent of danger that he or she poses at the time.

It explained that the willful killing of a person who does not pose danger is patently unlawful and entails personal criminal responsibility.