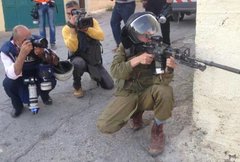 Furthermore, the army closed the road that leads to Palestinian agricultural lands, west of the al-Khader town, south of Bethlehem.

Ahmad Salah, Coordinator of the Popular Committee against the Wall and Settlements in al-Khader, said the soldiers closed the road, adjacent to settlement bypass road #60, preventing the Palestinians from reaching thousands of Dunams of farm lands in Ein al-Qassis, Thaher az-Zayyah, Wad al-Ghaweet and Wadi Salem.

Salah added that the soldiers also reinstalled the military tour in Bakoush area, west of al-Khader, posing threats on the lives of the residents, especially since the old tower was used, several years ago, to shoot many young Palestinians, leading to a number of deaths and many injuries.