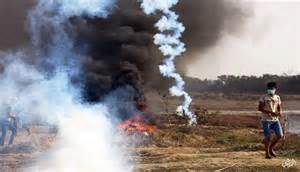 Israeli soldiers shot 11 Palestinians with live rounds, including one who suffered a serious injury, while dozens suffered the effects of tear gas inhalation, during clashes near border areas in the besieged Gaza Strip.Dr. Ashraf al-Qedra, spokesperson of the Health Ministry in Gaza, said five Palestinians were shot with live rounds, four in the legs and one was seriously injured after the soldiers shot him with a live round in his chest, near Nahal Oz Crossing.

In addition, one Palestinian was shot in the leg, during clashes in the al-Faraheen area, east of Khan Younis, in the southern part of the Gaza Strip.

The soldiers used special army vehicles and launchers that can fire dozens of gas bombs, from a large distance.