Cameraman Injured, Many Suffer Effects Of Teargas Inhalation, In Bil’in 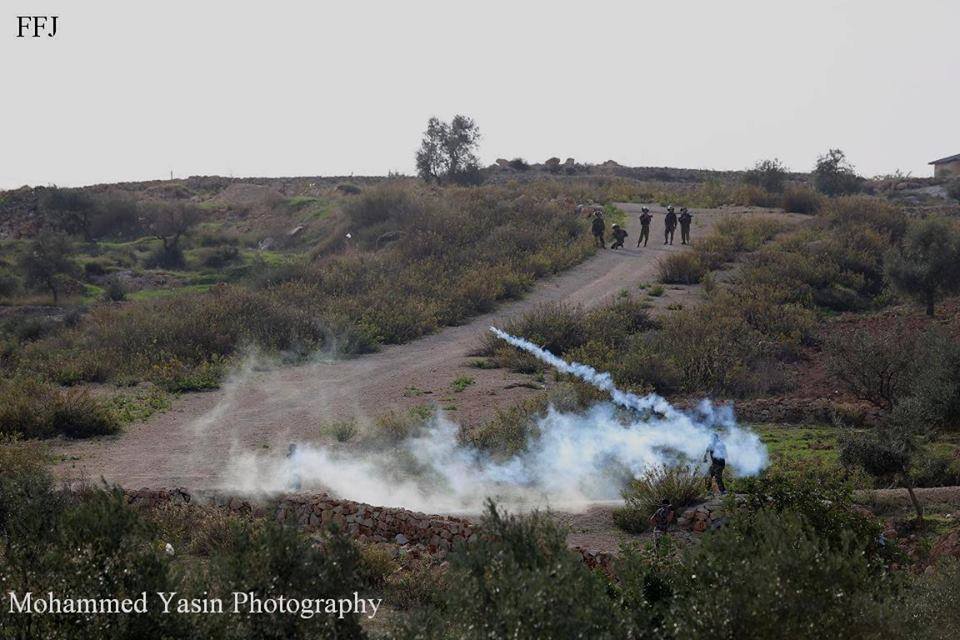 Israeli soldiers attacked, Friday, the weekly nonviolent protest, carried out by Palestinians, Israeli and international peace activists in Bil’in village, near the central West Bank city of Ramallah. A Palestinian cameraman was injured, and many suffered the effects of teargas inhalation.The residents and activists marched from the center of the village, chanting for the liberation of Palestine, the protection of Jerusalem and the holy sites in the occupied city.

The protesters carried Palestinian flags, and called for the release of all political prisoners, held by Israel.

They also marched marking the International Day for Solidarity with the Palestinian People.

Israeli soldiers, stationed on the main entrance of the village, started firing gas bombs on the protesters, in an attempt to prevent them from advancing towards Palestinian olive orchards.

Palestinian activist and cameraman, Hamdi Abu Rahma, was injured with a rubber-coated steel bullet, while many locals, Israeli and international peace activists suffered the effects of tear gas inhalation.

The attack led to clashes between the soldiers and dozens of local youths; the army fire more gas bombs and concussion grenades, and the youths hurled stones on them.

Bil’in is a leading village in creative nonviolent resistance against the Israeli occupation, the Annexation Wall that was deemed illegal by the International Court in its advisory ruling, Israel’s illegal colonies in occupied Palestine and the ongoing violations against the Palestinians, their homes and lands, and holy sites.