UPDATE: 82 Palestinians Shot and Injured Across oPt on Friday 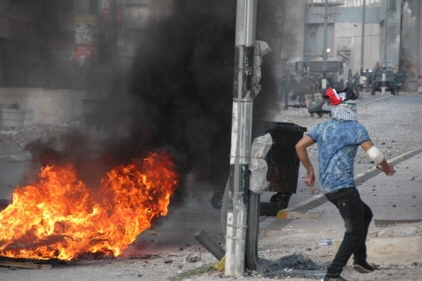 Five of those injured by live fire were shot when clashes erupted near the Nahal Oz crossing, to the east of Gaza City, one of whom was shot in the chest and left in critical condition, according to spokesperson for the Ministry of Health, Ashraf al-Qidra.

Several others were injured in Gaza when Palestinians demonstrated in areas north of Khan Younis, demanding the return of Palestinian bodies currently held by Israel, witnesses said.

An Israeli army spokesperson said that ‘multiple violent riots took place near the security fence’ between the Gaza Strip and Israel, where Israeli forces used ‘riot dispersal means’ to deter participants attempting to break through the security fence.

The spokesperson said that the forces opened fire on demonstrators after ignoring calls by the forces for the participants to halt.

One of those shot by live fire was left in critical condition, medics said, adding that dozens of others suffered from tear gas inhalation.

A total of 24 injuries from live fire were reported from the occupied West Bank, according to the Red Crescent, as well as 40 from rubber-coated steel bullets, and over a hundred who were treated for tear-gas inhalation.

In Hebron, 14 Palestinians were hit with live bullets, and 10 with rubber-coated steel bullets, Red Crescent said, adding that Israeli forces targeted an ambulance with tear gas, shattering its windshield.

In Kafr Qaddum, near Qalqilia, Qaisar Jihad, aged 13, and Hamza Mutei, 22, were shot in the legs and lightly injured after Israeli forces trapped protesters and opened fire, according to a spokesperson for the village’s popular resistance committee, Murad Shtewei.

Meanwhile, in the Nablus district, Ibrahim Khatayta and Salih Hanani, both 14 years old, were shot in the lower extremities by live fire in Beit Furik, a local council member, Mounadhel Hanani, stated.
He added that the teens were interrogated by Israeli forces before ambulances were allowed to treat them.

Thirteen Palestinians were also injured with rubber-coated steel bullets in the village of Qusra, including the head of the village council, Abd al-Athim al-Wadi, said Ghassan Daghlas, a PA official who monitors settler activity in the northern West Bank.

Around 160 Israelis have been injured by Palestinian individuals during the same time period, according to documentation by the UN Office for the Coordination for Humanitarian Affairs.