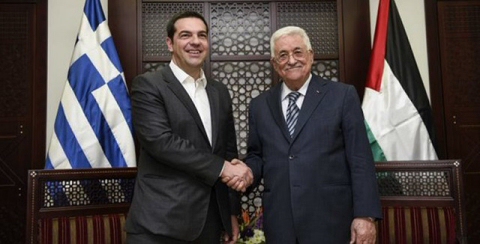 In a joint address, delivered Thursday with the Greek Prime Minister Alexis Tsipras, PA President Mahmoud Abbas warned Israel not to turn the ongoing Palestine-Israel conflict into a “religious” dispute.Abbas briefed Greek Prime Alexis Tsipras on the “intolerable, unacceptable and harsh conditions” of the Palestinians as a result of Israel’s actions.

He said, according to the PNN, that the “continuation of Israeli occupation, settler crimes, harassment, arrests and summary executions of our youths, as well as the economic siege against our people and the absence of a political horizon, have all prompted Palestinian youths to respond.”

According to the World Bulletin, the Greek Prime Minister expressed his concern about the ongoing construction of “Jewish-only” settlements on Palestinian land in the occupied West Bank.

“We are concerned about the [Israeli] policy of settlement expansion, which comes at the expense of the rights of the Palestinian people,” Tsipras said.

He also stressed the importance of safeguarding the historical status of Jerusalem’s holy places, including the Al-Aqsa Mosque.

Tsipras went on to urge Israel to take “bold steps” on the Palestinian issue, stressing his support for any international initiative in this regard, as reported by World Bulletin.

“We must achieve a two-state solution with a Palestinian state on the 1967 borders and with East Jerusalem as its capital,” he said.