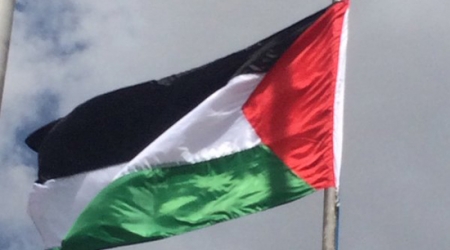 On Friday, the United Nations Economic Commission for Africa (UNECA) — the UN’s biggest entity in Africa — hoisted the flag of the state of Palestine at its headquarters, in the Ethiopian capital of Addis Ababa, to show solidarity with the cause of the Palestinian people in securing their right to statehood.World Bulletin/Al Ray reports that resident ambassadors of numerous countries, UN and African Union officials, as well as Ethiopian government representatives, attended the flag-raising ceremony that was accompanied by the Palestinian anthem.

‘On this international day of solidarity, let us reaffirm our commitment to bring about the justice and peace that the people of Israel and Palestine deserve,’ said United nations General Secretary-General Ban Ki-moon through his representative.

‘Today, 136 countries recognize the state of Palestine and its flag flies at the United Nation next to those of member states. However, these advances are not felt by children in Gaza or by residents of Nablus, Hebron and east Jerusalem,’ he said.

He said that both Israel and Palestine ‘should’ make necessary compromises to put an end to the conflict which has claimed numerous lives in past decades. ‘Both sides must reject incitement and inflammatory public statements,’ he said.

The Palestinian ambassador to Ethiopia and the African Union, Nasir Abu Jaish, called on the international community to take responsibility to end the suffering of Palestinians from forced deportation and incarceration of by Israeli forces.