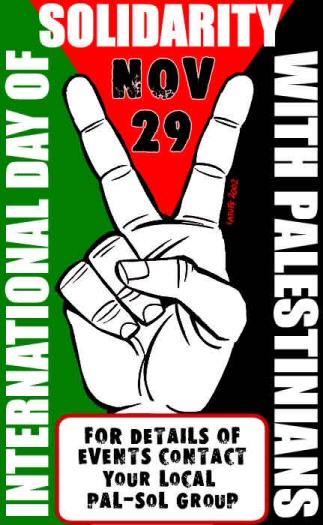 The Palestine News Network (PNN) reports that, according to the United Nations (UN), this date “was chosen because of its meaning and significance to the Palestinian people… Of the two States to be created under this resolution, only one, Israel, has so far come into being.”

Also, as described by the UN, today is “an opportunity for the international community to focus its attention on the fact that the question of Palestine remained unresolved and that the Palestinian people are yet to attain their inalienable rights as defined by the General Assembly, namely the right to self-determination without external interference, the right to national independence and sovereignty, and the right to return to their homes and property from which they had been displaced.”

Today, messages from the Palestine Liberation Organization and the Palestinian Authority are being seeing across the internet.

Below, it is a press release from PLO Executive Committee Member Dr. Hanan Ashrawi on the occasion of the International Day of Solidarity with the Palestinian People.

“Three years ago, 138 countries overwhelmingly voted in support of Palestine’s enhancement of status at the United Nations. The international community made a powerful statement that Palestinian self-determination and freedom trump Israel’s military occupation, and voted in favor of Palestine as a non-member observer state.

Three years later, we, the Palestinian people, are witnessing an end to the two-state solution as Israel works to destroy the chances for peace and stability with its systematic and deliberate plans to establish “Greater Israel” on historical Palestine.

In spite of the disastrous and alarming conditions on the ground, we extend our gratitude to the members of the international community that have expressed their genuine solidarity with us, courageously stood on the right side of peace, justice and dignity, and actively supported Palestinian aspirations for independence and liberty.

We thank those individual countries and parliaments that have upheld their principles and recognized Palestine, and we are grateful to the global solidarity movements that have boldly worked to hold Israel accountable, end the occupation, guarantee the protection of the Palestinians, and preserve Palestinian human rights.

We are currently witnessing genuine solidarity for Palestine—in this month alone, the European Commission adopted new guidelines for labeling products and goods produced in the illegal settlements in Occupied Palestine (This move is a modest first step, and such labeling should develop into a total boycott of all settlements and settlers); the American Anthropological Association became the largest U.S. academic organization to approve a boycott of Israeli institutions and to affirm the Boycott, Divestment and Sanctions movement; and the British Labour Party’s National Executive Committee voted to boycott private security company G4S for its direct involvement with Israeli prisons.

Such examples of active and positive engagement send an important message of hope and encouragement to our people—the popular non-violent struggle for Palestinian inalienable rights in the face of the belligerent occupier is possible, and our continued steadfastness and commitment to freedom will not end in vain.

We are determined to continue working with our international solidarity partners and to persist in our political, legal and diplomatic efforts to ensure that the chances for peace and freedom have not been destroyed indefinitely. It is our hope that the Palestinian people will finally experience a situation free of the occupation and the grave injustices that they have been subjected to for decades.”