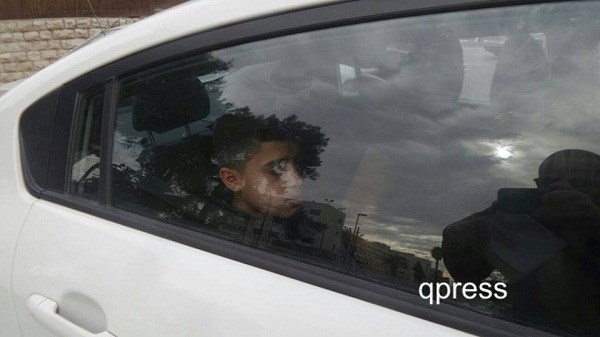 A 13-year old Palestinian boy accused of stabbing and wounding a 13-year old Israeli boy had a court appearance Thursday. On October 11th, Ahmad Manasra was run over by a car and beaten nearly to death by a group of Israelis, then subjected to brutal interrogation with no lawyer or parent present.Ahmad Manasra’s lawyer presented evidence contradicting the Israeli government’s claims that the boy stabbed an Israeli. The boy himself has no memory of carrying out the attack, and no eyewitnesses have linked him directly to the attack. Video footage of the stabbing of the 13-year old Israeli boy being stabbed on his bicycle does not show the assailant.

A 20-year old Israeli was also wounded in the attack.

A video of Ahmad lying injured and bloody on the ground after being hit by the car was uploaded to social media and went viral. In the footage, a settler onlooker can clearly be heard saying: ‘Die, you son of a whore! Die!’, while another tells the police officer to shoot the boy until he dies.

During an earlier court hearing, on November 10th, Ahmad’s lawyer testified that “Ahmed admits he took part in the event but does not admit the stabbings. He did not intend to murder anyone, only to scare. He even tried to dissuade his cousin from stabbing the boy.”

Ahmad’s 15-year-old cousin, Hassan, was with Ahmad near the site of the stabbing attack when the two boys were assaulted by Israeli soldiers and settlers. Hassan was shot dead on site by Israeli occupation forces, while Ahmad was run over by an Israeli settler car and seriously wounded.

Ahmad says he has no memory of the attack, saying said he woke up next to find himself tied to a hospital bed, under police guard, who reportedly abused him physically and verbally throughout his stay at the hospital. He said the guards kicked him and allowed an Israeli civilian to verbally assault him.

Manasra said he couldn’t eat because his right hand was tied to the bed, adding that he was not allowed to use the bathroom and was forced to urinate in a bottle.

He said that he was subjected to long hours of interrogation – with investigators assaulting him – while on his hospital bed, which further aggravated his excruciating pain.

On October 20, Manasra was transferred to jail, where he was also subjected to long hours of interrogation and verbal assault, while being strapped down to a chair by his hands and feet.

In a ten-minute video showing a part of Manasra’s interrogation, the boy is shown crying while interrogators yell at him. Again and again the 13-year old repeats that he does not know about the attack, that he does not remember anything. He begs the men to ‘take me to a doctor to see if I remember.’ The video was widely criticized by human rights organizations, but the Israeli Shin Bet service defended their use of harsh interrogation against the boy.