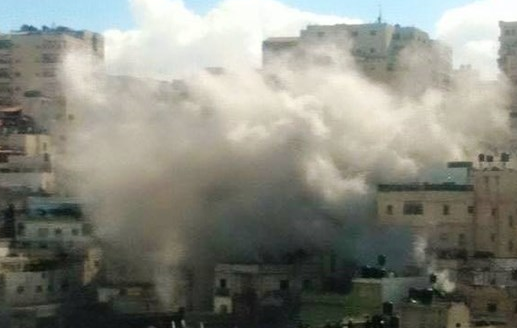 Hundreds of Israeli soldiers invaded, on Wednesday at noon, the Shu’fat refugee camp, in occupied Jerusalem, after completely surrounding the camp and exploding a Palestinian home — causing structural damage to a number of nearby homes.The hundreds of soldiers were deployed in different parts of the refugee camp, while sharpshooters occupied the rooftops of many buildings.

The demolished property is the third floor of a residential building, owned by Ibrahim al-‘Akari, who was killed by the Israeli army last year.

Family lawyer Midhat Deeba said the soldiers first demolished parts of the property before wiring and detonating it.

Deeba added that the surrounding home of the al-‘Akari brothers were badly damaged by the blast. The families were removed from their properties before the soldiers demolished the al-‘Akari home.


The Israeli invasion and demolition led to clashes between the soldiers and dozens of local youth in different parts of the refugee camp, while a number of armed Palestinian resistance fighters also exchanged fire with the invading soldiers in the at-Tehta neighborhood, near the neighborhood were al-‘Akari family home is located.

The soldiers also surrounded the homes of Mohammad Ali and Ahmad Salah, who were both killed by the army in October. It is worth mentioning that the body of Ali is still held by Israeli authorities, who refuse to release the body to Ali’s family.