‘Bring Our Sons Back’ 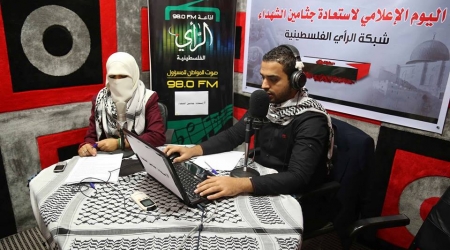 Palestinian media networks have launched the media campaign, ‘Bring Our Sons Back’, calling for the return of the bodies of Palestinians killed in the latest incidents of civil unrest in the occupied West Bank.The director of Al Ray Palestinian media network, Ismail Athawabtah, said that activities began Wednesday morning, 12/02/15, with the participation 19 local radio stations, and to last for nine hours.

He explained that 22 Palestinian figures representing Palestinian government factions, the PLO, the Red Cross, and a number of human rights activists, were to join in the event.

30 journalists from Gaza, the West Bank and occupied Jerusalem, along with 15 families of slain Palestinians whose bodies were seized by Israeli forces, will participate as well.

‘The aim of this campaign is to demand the bodies of Palestinians killed in the last wave immediately and without prior conditions,’ he said, noting that holding their bodies constitutes a violation ofinternational laws and humanitarian principles.

He called on governmental institutions headed by the Palestinian Authority, Palestinian government, the PLO, and all other concerned bodies, to work in putting an end to this crime against humanity which all the world is silently witnessing.

Israeli occupation authorities have seized the bodies of some 44 Palestinians who were shot dead during the wave of unrest which has swept over the occupied West Bank and Jerusalem, since last October.

Also in IMEMC Human Interest: Military Roadblocks? We Have An App For That!