ADWAR: December a Month to End Violence against Women 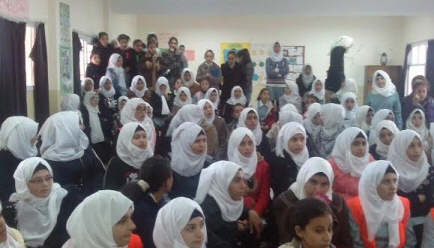 On the occasion of the international month for violence elimination against women, ADWAR Association’s general director presented an awareness session in cooperation with Soreef Elementary School for girls (UNRWA).They discussed the topic of gender based violence and violence practiced by Israeli occupation forces on Palestinian women, in order to highlight Palestinian young women and girl’s suffer to the Palestinian and international communities.

It was established in early 2010, by a group of students from different universities, in the Hebron district, where they volunteered and worked effectively, believing that reaching social justice goes through gender approach.

Gender approach, they say, will reduce the gaps between men and women in different scopes, while enhancing women’s participation and empowerment through the realization of their social, economical and political rights, and by using an effective mechanisms in partnership with all governmental, nongovernmental, women and international organizations and academic Palestinian universities.

According to UN Women, “from 25 November through 10 December, Human Rights Day, the 16 Days of Activism against Gender-Based Violence aim to raise public awareness and mobilizing people everywhere to bring about change. This year, the UN Secretary-General’s UNiTE to End Violence against Women campaign invites you to “Orange the world,” using the colour designated by the UNiTE campaign to symbolize a brighter future without violence. Organize events to orange streets, schools and landmarks!”