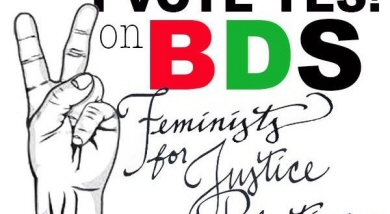 Another group of US scholars voted to joined the BDS movement: the National Women’s Studies Association (NWSA), PNN reports.According to the Jerusalem Post, the NWSA vote on the BDS referendum passed 653 (88.4%) to 86 at the organization’s annual conference earlier this month, the association announced last week. Thirty five percent of the NWSA membership voted.

The recommendation to join the BDS movement was sponsored by Feminists for Justice In/For Palestine. A resolution was submitted to National Women’s Studies Association and says:

“As feminist scholars, activists, teachers, and public intellectuals we recognize the interconnectedness of systemic forms of oppression. In the spirit of this intersectional perspective, we cannot overlook the injustice and violence, including sexual and gender-based violence, perpetrated against Palestinians and other Arabs in the West Bank, Gaza Strip, within Israel and in the Golan Heights, as well as the colonial displacement of hundreds of thousands of Palestinians during the 1948 Nakba. The discriminatory treatment, exclusion, military siege and apartheid imposed by Israel on its own Palestinian citizens as well as those residing in the occupied territories constitute flagrant breaches of international law, UN resolutions, and fundamental human rights.”

“In the present moment, our counterparts in Palestine face daily violations of their human rights, including their academic rights to free speech, assembly, association, and movement. At the same time, Israeli institutions of higher learning have not challenged, but instead legitimized, Israel’s oppressive policies and violations. These violations, which severely impact the daily lives and working conditions of Palestinian scholars, students, and the society at large, are also enabled by U.S. tax dollars and the tacit support of western powers, thus making any taxpayer in the West complicit in perpetuating these injustices.”

Established in 1977, the Association, according to its website, “has as one of its primary objectives promoting and supporting the production and dissemination of knowledge about women and gender through teaching, learning, research and service in academic and other settings.”

Earlier this month, with over 10,000 members, the American Anthropological Association (AAA) has become the largest scholarly institution in the United States to endorse the academic boycott of Israel when its general conference voted overwhelmingly last night for a Boycott, Divestment and Sanctions (BDS) resolution.

The historic vote attracted an unprecedented 1176 votes, with 1040 votes for the motion (88.5%) to boycott Israeli academic institutions and 136 votes (11.5%) against the motion.