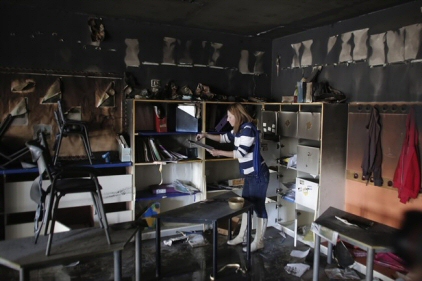 An Israeli court, on Tuesday, sentenced a Jewish extremist to three years in prison for his part in an arson attack on a mixed Palestinian and Israeli school in Jerusalem, last year.Yitzhak Gabbai, aged 31, was sentenced to two years for the attack, and a further ten months for possession of a knife and incitement to hatred. He was also ordered to pay 10,000 shekels ($2,584) in compensation to the Hand-in-Hand school.

According to Ma’an, the sentence followed Gabbai’s earlier confession to setting fire to a classroom in the school and daubing ‘Death to Arabs’ on one of its walls, the court said.

Gabbai carried out the attack on Nov. 29, 2014, along with brothers Shlomo and Nahman Twito, who were sentenced to two years and two and a half years respectively in July this year.

All three are members of the extremist anti-Palestinian group Lehava, which is believed to have carried out a number of violent hate crimes against Palestinians.

Hand-in-Hand, which has six schools of 1,400 children across Israel — half Jewish and half Palestinian — is viewed as a rare model of tolerance in an otherwise fiercely divided society.

The schools said in a statement: ‘We are less interested by the several years the arsonist will spend in prison than we are by the message. The court made a clear statement against incitement and against the distribution of racially inflammatory material.’

The schools added that this message would be communicated to the students and their parents, adding that they would continue to work toward a more egalitarian education, which they said was their ‘answer to racial incitement.’

The members of the extremist Lehava group follow the teachings of the late Meir Kahana, an anti-Palestinian rabbi whose Kach party was banned in Israel.

Along with ‘Death to Arabs,’ slogans such as ‘Kahana was right’ and ‘There’s no coexistence with cancer’ were found scrawled on the school’s walls after the arson attack.

Lehava’s leader Bentzi Gopstein, said at the time that his organization did not act illegally, accusing Israeli authorities of trying to frame Lehava to thwart its ‘holy work of saving the daughters of Israel.’
The attack sparked a wave of international condemnation and came amid months of mounting unrest across Jerusalem.

Palestinians have still been waiting for action to be taken against Jewish extremists responsible for an arson attack in the West Bank village of Douma earlier this year.

The attack on July 31 claimed the lives of three members of the Dawabsha family — an 18-month-old toddler and his parents — leaving only four-year-old Ahmad Dawabsha alive.

A number of Jewish extremists were afterward detained, but nearly all of them were later released and none were convicted over the deadly attack.

Israeli news site Ynet, on Sunday, reported that Israel had made a breakthrough in ‘one of the most serious acts of Jewish terrorism to take place in recent years,’ but the details remained under gag order and the site could not confirm that it was referring to the Douma attack.

Ynet quoted ‘a relative of the family hurt by the Jewish terror attacks,’ who told them he had not received any updates from Israeli authorities about a development in the investigation.

He told the news site: ‘When it’s Jewish terrorists, the defense establishment works slowly. But when it’s Palestinian terrorists, they capture them within two days and bring them to justice.

‘I want to believe the defense establishment brings to justice the criminals who ruined my life and that of my family’s.’