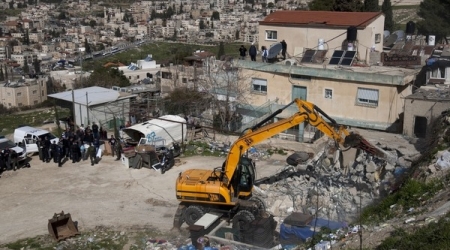 Israeli bulldozers demolished, on Tuesday morning, a Palestinian house in the town of Arraba (also known as Arrabat al-Battuf), Upper Galilee, in pre-1948 occupied Palestine.Ashraf Khatib, a resident of the town, said that the Israeli occupation bulldozers, protected by police and special forces, stormed the town and demolished a house belonging to the family of Said Khatib, under the pretext having no permit.

He reported that the two-storey house has been completely torn down, according to Al Ray.

Palestinian citizens confirmed that clashes occurred between Israeli forces and a number of people of the town before and after the demolition.

Locals reported that Israeli forces took into custody three youth, including two of the owners of the destroyed house.