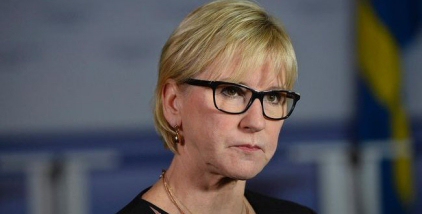 Swedish Foreign Minister, Margot Wallström, is once again racking up criticism for her accusations against the Israeli government, this time in regard to the execution of Palestinian assailants without trial.On Friday, when asked by a Swedish parliamentarian why she refused to condemn Palestinian acts of violence against Israelis, Margot replied that while she did not condone terrorism and that Israel did have a right to self-defense, “at the same time the [Israeli] response doesn’t need to be extrajudicial executions or disproportionate force”, causing [another] diplomatic crisis between the two governments.

Wallström’s comments were made during a discussion at the Swedish parliament about the ongoing wave of violence and terror attacks raging in Palestine, PNN reports.

A fast response from the Israeli Ambassador to Stockholm, Isaac Bachman, followed her statement:

“Israel’s moral standards when it comes to fighting terrorism are at least at par with other Western nations coping with the same threat,” Bachman said. “Israeli practices are even more successful in avoiding civilian casualties than in other Western nations’ cases, according to verified military statistics”.

Last month, after the Paris attacks, Wallström was asked the following question on Swedish television:

“How worried are you about the radicalization of young people in Sweden who are fighting for ISIS?”

According to the translation, Wallström answered:

“Obviously, we have reason to be worried, not just in Sweden but across the world, because there are so many that are being radicalized. Here, once again, we are brought back to situations like the one in the Middle East, where not least, the Palestinians see that there isn’t a future. We must either accept a desperate situation or resort to violence.”

In October, Wallström displeased the Israeli government with a tweet about the wave of violence in Palestine:

Sweden is one of the countries that is leading the call to place consumer labels on settlement products, exacerbating the tensions between Stockholm and Tel Aviv, prompting a scathing response from the Israeli ambassador to Sweden.