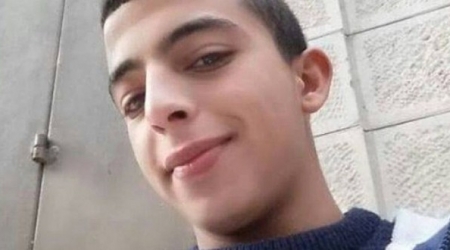 15-year-old Khalil Mohammed Ahmed Kiswani is now in the intensive care unit of Hadassah Ein Kerem hospital, in Jerusalem, after an eye amputation.Kiswani was shot in his left eye with a rubber-coated metal bullet fired by Israeli forces during a raid on Shu’fat refugee camp, last Wednesday.

Kiswani’s family explained, according to Al Ray, that their child was shot after leaving school accompanied with his father. Kiswani sustained a brain hemorrhage and fractures to his skull, leading to the amputation of his left eye.

The family said that their son has undergone four surgeries in recent days, as medics attempted to quell the internal bleeding which had occurred.

Some 1,200 members of the Israeli army stormed into Shu’fat, last Wednesday, to demolish the home of Ibrahim Akkari, provoking the outbreak of violent clashes between Palestinian youth and Israeli soldiers.