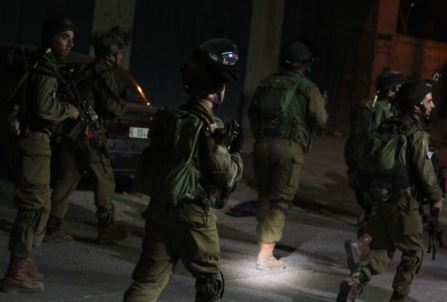 Israeli soldiers have kidnapped, earlier on Tuesday, at least twenty-one Palestinians in different parts of the occupied West Bank, including a former political prisoner and the brother of two slain Palestinians, and three detainees.Media sources in Hebron, in the southern part of the West Bank, said the soldiers invaded and ransacked several homes, interrogated many residents and kidnapped four Palestinians identified as Mo’men Nidal Zghayyar, 19, his brother Salah, 21, in addition to Ziad Ali al-Qawasma, 39, and Fadi Abdul-Hakim Abu Daoud, 28..

The sources added that al-Qawasma is a former political prisoner, who was held by Israel for thirteen years, and that he is also the brother of two Palestinians, who were killed by the Israeli army, and three who are imprisoned by Israel.

The soldiers also invaded several neighborhoods in Hebron city, and searched the home of former political prisoner Mousa Waswaz, who lives in Gaza after Israel forced him out of the West Bank.

In addition, Israeli soldiers, stationed on the al-Karama Border Terminal, have kidnapped another Palestinian, identified as Morad Merwih Qabaha, 23, from Ya’bad town south of Jenin, as he was heading back home from Jordan.

In Tulkarem, also in the northern part of the West Bank, the soldiers searched many homes and kidnapped Zayed Sami Abdul-Aziz Salman, 40, and Afeef Mohammad Roshdi Atteely, 22.

They also confiscated the ID cards of Bassel Mohammad Abdullah Moammar, and his sister Aya, before illegally confiscating a large sum of cash from the family home.

The soldiers also invaded al-Mogheer town, northeast of the central West Bank city of Ramallah, and kidnapped Bassel Abu Alia, in his thirties, allegedly in connection with a stabbing attack carried out on November 30, on the Za’tara roadblock.

The Israeli army claims that Abu Alia and another Palestinian were riding their motorcycles, “before attacking the soldiers.”

Abu Alia was reportedly injured in the attack, before he was moved to Rafidia Hospital in Nablus, then to a hospital in Ramallah.

In occupied Jerusalem, the soldiers kidnapped a Palestinian child, identified as Akram Hassouna, 16, after the army invaded and searched his home.

During the invasion into the refugee camp, the soldiers shot and killed Malek Akram Shahin, 18.

He was shot with a live Israeli army round in his head, and was moved to Beit Jala Hospital, where he died of his serious injury.