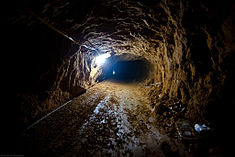 7 people have been rescued, but 14 remain missing Tuesday morning, after Egyptian authorities flooded a tunnel across the Egypt-Gaza border with no warning. The tunnel runs between Gaza and Egypt’s Sinai peninsula, and is one of a number of such tunnels that serve as a lifeline for the besieged Palestinian population of the Gaza Strip.

The Palestinian Civil Defense rescue workers rushed to the scene on Tuesday morning, after Egyptian authorities flooded the tunnel with seawater. The rescue workers are trying to locate the 14 people who remain underground in the tunnel following the intentional flooding.

Egyptian authorities, working with the Israeli authorities, have attacked the tunnels in a variety of ways in recent months, causing a number of deaths.

Palestinian rescue teams managed to pull out 7 people. But 14 remain unaccounted for.

Residents of Gaza, who number more than 1.6 million, depend on the tunnels to import much-needed medical, construction, agricultural and school supplies which are prevented by the Israeli government from being imported across the above-ground border crossings.

Israeli authorities have banned the import of thousands of necessary items under the pretext of ‘security’, although some Israeli officials have publicly admitted that the eight-year siege has involved a determination of the minimum calorie consumption that people can survive on, and refusing to allow in any more than that minimum.