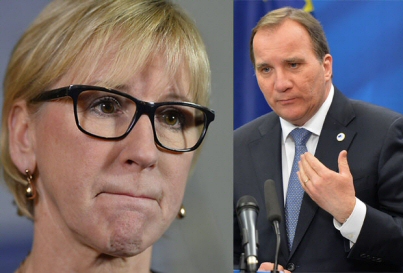 “No, it [individual knife attacks carried out by Palestinians to face heavily armed Israeli troops while storming civilian homes] is not classified as that. There is an international classification when it is, or is not. What I know is not classified as terrorism,” he told Swedish news agency TT.

Löfven made it clear, according to Days of Palestine, that he knew the difference between individual attacks carried out by oppressed civilians and those which would be considered organised attacks.

Current Palestinian resistance in the Palestinian territories have included individual knife attacks carried out by Palestinians whose close relatives had been savagely murdered by the Israeli occupation.

Rights groups have questioned whether or not all of the reported attacks are, in fact, genuine.

“I was referring to the fact it is not clear whether these knife attacks have been organised by some classified terrorist organisation,” he said, “but organised attacks are precisely acts of terrorism,” Löfven went on to say.

Wallström added: “The situation in the Middle East is difficult enough without having to be encumbered by misunderstandings about anybody’s intentions,” a joint statement issued by Löfven and Wallström said.

About a month ago, Wallström attributed the reason behind the instability in the Middle East to the “desperate situation” of Palestinians under Israeli occupation.

During an interview on Swedish TV channel SVT2, shortly after the Paris attacks, she was asked if she is concerned about the radicalisation of Swedish youth who fight with ISIS.

“Of course we have cause for concern, not just in Sweden but throughout the world, because there are so many being radicalised,” Wallström replied.

“And again, it reminds us of the situation in the Middle East, where the Palestinians see that there is no future for them and have to either accept a desperate situation or resort to violence,” she added.