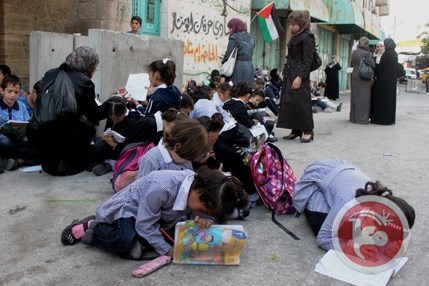 A group of Israeli extremists prevented Palestinian children from going to school in Hebron city, on Thursday, the director of the Palestinian Authority’s Ministry of Education Hebron office said.According to Ma’an, Bassam Tahboub said that Anat Cohen, a well-known extremist who frequently harasses Palestinian residents in the area, first ‘attacked’ the school children, ‘preventing’ them from reaching Qurtuba middle school.

Following Cohen’s initial attack, other extremists reportedly joined in and began cursing and scaring the children. Instead of attempting to continue to school, the children decided to turn back and head home, Tahboub said.

Children who attend Qurtuba school, aged 7 to 16, are often harassed by settlers in area, as the school is adjacent to the illegal Israeli settlement of Beit Hadassah in the center of Hebron city.

According to Tahboub, Israeli settlers in the area have continuously attempted to have the school closed down.

Hebron has become the epicenter of recent violence over the last two months, as roughly 30 percent of the 115 Palestinians to be killed since Oct. 1 have been from the Hebron district.

Hebron’s city center is home to some 800 notoriously aggressive Israeli settlers, who live under the protection of thousands of Israeli forces, surrounded by more than 30,000 Palestinians.