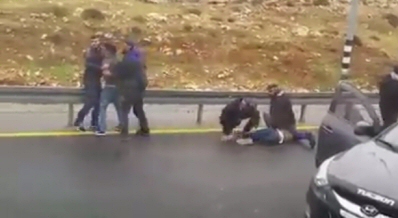 A group more than five Israeli soldiers dressed as Palestinian civilians (Musta’ribeen), on Sunday morning, opened fire on and kidnapped two Palestinian youths from Jabaa’ checkpoint, north of Jerusalem.Media sources said, according to the PNN, that the Musta’ribeen, AKA Death Unit, kidnapped the youths after opening fire at their vehicle on Jabaa’ checkpoint. One of them was injured in the shooting.

Last month, the Musta’ribeen broke into Al-Ahli Hospital in Hebron overnight, executed a patient and kidnapped his cousin.

According to the hospital CCTV, one of the group members was dressed as a pregnant woman wearing the Hijab and Jilbab (Islamic dress code), and another faked being a patient on a wheel-chair to infiltrate the hospital. The rest were dressed as Palestinians and wearing the Kufiyyeh (Palestinian scarf).

Minutes later, their guns were out.

The same unit has infiltrated at least five Palestinian demonstrations within the past two months, where they shot and kidnapped youth from Ramallah, Hebron, Bethlehem and Jerusalem, which also include schoolboys.

The unit includes soldiers who are professionally trained to act, speak and look like Palestinians. They are armed and guarded by Israeli soldiers during their sudden attacks.