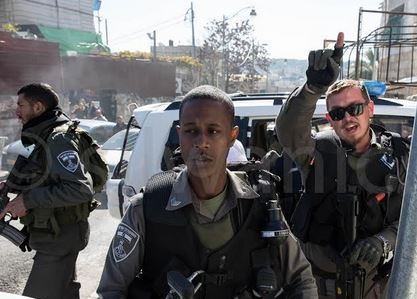 At least three Palestinians were kidnapped in Hebron, on Thursday at dawn, one in Jenin, and a woman in occupied Jerusalem, after the Israeli military invaded many Palestinian areas in the occupied West Bank.Media spokesperson of the Popular Committee against the Wall and Settlements in Hebron, Mohammad Ayyad Awad, has reported that the soldiers invaded Beit Ummar town, north of Hebron, and kidnapped three Palestinians.

The kidnapped have been identified as Rami Khalil Abu Dayya, 20, Moath Wael Ekhlayyel, 19, and Karam Yousef Ekhlayyel, 16, and took them to the Etzion military base.

Ayyad added that the soldiers fired several gas bombs at a number of homes, causing many residents to suffer the effects of tear gas inhalation.

The soldiers stopped and searched many Palestinian cars, and interrogated the residents while inspecting their ID cards.

He also stated that the soldiers have kidnapped 21 Palestinians, including 11 children, in Beit Ummar, since the beginning of this month.

Various roads in the town remain blockaded with iron bars and gates, in addition to sand hills installed in several areas.

In occupied Jerusalem, the soldiers kidnapped ‘Abeer Ziad, from the ath-Thoury neighborhood in Silwan, south of the Al-Aqsa Mosque.

The Wadi Hilweh Information Center in Silwan (Silwanic) said ‘Abeer is a member of the Fateh Movement’s Regional Council in Jerusalem, and that she was kidnapped after the soldiers stormed her home, approximately at three at dawn.

The soldiers also invaded the Women’s Center in Silwan, headed by ‘Abeer, searched it and confiscated several documents. The soldiers summoned ‘Abeer’s husband for interrogation.

Also on Thursday at dawn, the soldiers invaded several villages and refugee camps, in the Ramallah and al-Biereh District, in the occupied West Bank, searched many homes causing excessive damage, and kidnapped five Palestinians.