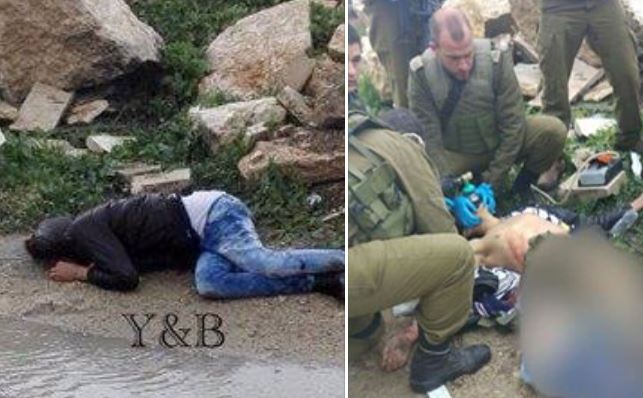 Israeli soldiers shot and killed, on Thursday morning, a Palestinian child near the Huwwara roadblock, south of the northern West Bank city of Nablus, allegedly after he attempted to stab soldiers. Army kidnaps 24 Palestinians overnight.Israeli sources said the soldiers shot the Palestinian, and claimed that he ‘approached them while carrying a knife.’

The Israeli National News said the soldiers ‘spotted a subject, and approached to question him,’ and claimed that, ‘he ran towards them, before they shot him.’

Eyewitnesses said the child did not carry any weapon, and never attempted to attack the soldiers.

Ambulance driver Kamal Badran said the soldiers surrounded the Palestinian, and prevented the medics from approaching him.

The soldiers closed all military roadblocks, south of Nablus.

It is worth mentioning that the soldiers have kidnapped, overnight and at dawn Thursday, at least 23 Palestinians in different districts in the West Bank.

Three Palestinians, identified as Nimir Ibrahim Nayfa, 45, Fawwaz Abdul-Rahman Ashqar, 52, and his son ‘Odai, 21, were kidnapped from their homes, in the northern West Bank district of Tulkarem.

In Qalqilia, in the northern part of the West Bank, the soldiers kidnapped Islam Tawil, 22, and Abdul-Karim Fares Shbeita, 28.