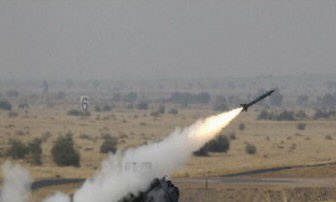 No damage or injuries were reported, as is typical of such rocket attacks. (Palestinian resistance rockets are, most often, little more than hollow tubes stuffed full of dynamite and contain no guidance system.) Israeli forces were searching the area following the strike.

The Israeli air force has carried out at least two air strikes in December so far, both in response to rocket fire from the besieged enclave.

Sporadic rocket fire has come from the Gaza Strip this year and has been met with retaliatory Israeli attacks, with the military making at least 50 incursions into the enclave since the start of 2015, according to the UN Office for the Coordination of Humanitarian Affairs.

In October, a 2-year-old Palestinian and her pregnant mother were killed in an Israeli air strike on their home.

About four Palestinians have been injured by Israeli artillery shelling in the Gaza Strip, on Wednesday night; one injury has been reported as critical, according to the PNN.

The troops on the eastern borders of the strip have reportedly opened fire on the homes of citizens in Khan Younis, leading to four injuries, one of them serious.

Last Wednesday, Israeli tanks and bulldozers have carried a limited invasion into Al-Breij refugee camp, also in central Gaza, in the midst of continuous gunfire.

According to locals, three tanks and three bulldozers have gone 150 meters into farmland of the strip, and started bulldozing land in midst of random gunfire.

Many residents have reported such attacks on their farms and homes in Gaza, where tanks invade and bulldoze land, and soldiers open fire in the area, terrorizing residents and forcing them to flee.