Army Carries Out A Limited Invasion In Southern Gaza 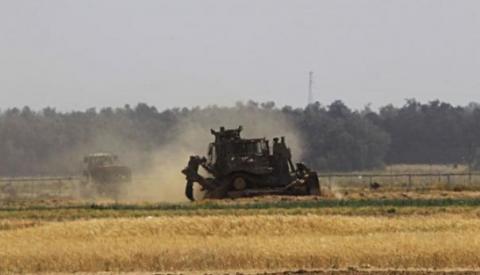 Several Israeli military bulldozers and tanks carried out, on Friday morning, a limited invasion into the al-Qarara area, north of Khan Younis, in the southern part of the Gaza Strip.The soldiers advanced into Palestinian agricultural lands, close to the border fence, and bulldozed them.

The army also advanced towards a number of homes in al-Qarara, and withdrew later; no clashes or exchanges of fire were reported.

Two days ago, three Palestinians were injured after the army fired a number of shells, and several live rounds, targeting agricultural lands, close to the border fence, in Khan Younis.

The soldiers also fired live rounds targeting a number of homes, west of the border fence, extending from al-Qarara, north of Khan Younis, all the way to Khuza’a in the south.