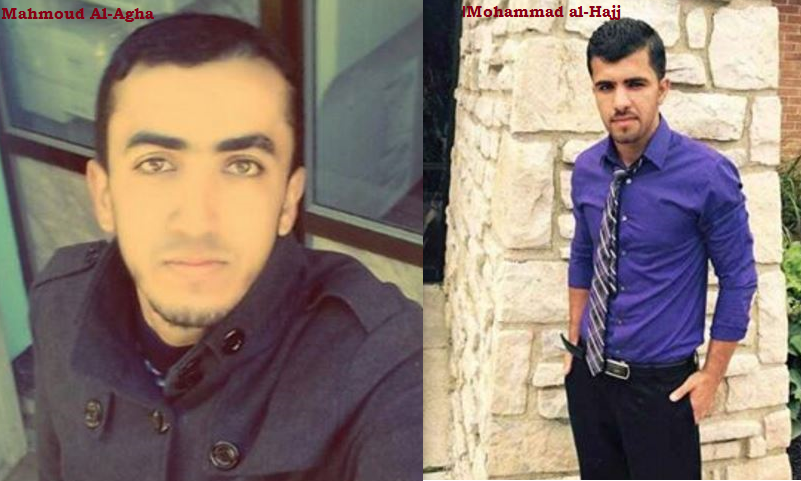 According to the Israeli army, Ayyad ‘attempted to ram soldiers with his car before they shot him,’ and that no soldiers were hurt in the reported incident.

It claimed that ‘the young man sped towards the soldiers, but they hid behind concrete blocks, before the car crashed into blocks.’

The soldiers fired several live rounds on the Palestinian, after his car crashed, and left the wounded young man to bleed to death, before an Israeli ambulance arrived at the scene, and took him to an unknown destination.

In the Gaza Strip, the Palestinian Health Ministry said the soldiers shot and killed Mahmoud Mohammad al-‘Agha, 20, during clashes that took place, east of Khan Younis, in the southern part of the besieged coastal enclave.

It is worth mentioning that Mahmoud is the brother of Bassem al-Agha, who was killed during Israel’s war on the Palestinians in Gaza, in the summer of 2014, leading to the death of more than 2142 Palestinians, including 578 children, 264 women, and 103 elderly, while more than 11100, including 3374 children, 2088 women and 410 elderly, have been injured.

The Ministry added that the soldiers also shot and injured 40 Palestinians, in the Gaza Strip, on Friday; 31 of them with live rounds, and the rest with rubber-coated steel bullets, while dozens suffered the effects of tear gas inhalation.

The Israeli army killed 127 Palestinians, including 25 children and six women, since October 1, while around 14.740 have been injured, including at least 4698 with live fire and rubber-coated steel bullets.

Twenty of the slain Palestinians were killed in the Gaza Strip, one in the Negev, and the rest in the occupied West Bank, including Jerusalem.

The army also shot and injured 333 children with live rounds, and 149 with rubber-coated steel bullets, while 53 children suffered fractures and bruises after the soldiers and settlers assaulted them, and eighty others suffered the effects of tear gas inhalation, including some who were shot with gas bombs.

Approximately 9650 Palestinians suffered the effects of tear gas inhalation, 350 suffered fractures and bruises after being attacked by Israeli soldiers and settlers, and 40 others suffered burns due to gas bombs and concussion grenades.