Gaza Siege: No Deal with Ankara 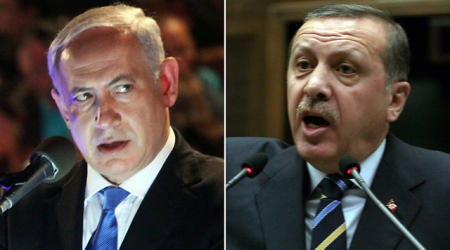 On Thursday, it was reported that Israel and Turkey, in secret talks in Switzerland, had reached ‘understandings’ to normalize ties that were downgraded, in the aftermath of the 2010 Mavi Marmara incident. Turkish Foreign Minister Mevlut Cavusoglu said that talks with Israel were ongoing, though Israel had met only one of the three conditions Turkey had set.A senior Turkish government official, who asked not to be named, told reporters on Friday that progress had been made on Turkey’s key demands of lifting the blockade on the Gaza Strip and compensation over the 2010 raid.

However, Israeli sources reported that if Ankara stands fast to the demand of lifting Gaza’s blockade, no normalizing ties agreement between Israel and Turkey will be reached.

On the other side Israeli media reported that the Israel demanded a heavy limitation on Hamas activity in Turkey.

Israeli officials largely welcomed the deal, but said Israel should stick to its guns when it comes to security and limiting of activity of some members of the Palestinian Islamist group Hamas living in Turkey.

The official who provided Friday’s update did not confirm Israeli media reports that Turkey will prevent the Hamas operative ‘Salah Aruri’ from entering its territory and acting from there.

Israeli sources reported that talks with Turkey regarding gas exports will not be at the expense of its good relation with Egypt, Cyprus and Greece.

Israel made clear that normalizing ties with Turkey will not affect Israeli-Russian relations, explaining that it does not make of Ankara a strategic ally.

Israeli officials said a deal to normalize relations came after high-level bilateral talks in Switzerland. A Turkish official confirmed the talks, saying they continued positively but denying a final deal was done as yet.

Israeli channel 10 reported that both sides reach some understandings, including returning the ambassadors, abolition the lawsuit against Israeli officers and soldiers while Israel will establish fund to compensate the victims of the Mavi Marmara attack.

Ties between Israel and Turkey broke down after the 2010 Mavi Marmara incident, when elite Israeli soldiers were ordered to board the Turkish Mavi Marmara ship.