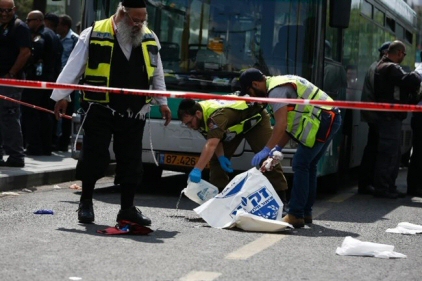 A Palestinian from the occupied West Bank reportedly injured three Israelis in a stabbing attack which occurred in the town of Raanana north of Tel Aviv, Israeli police said.Israeli police spokesperson Luba al-Samri stated that a 20-year-old Palestinian from the village of Tammum was arrested after stabbing and moderately injuring one, and leaving two other victims lightly injured.

Two victims were taken to a nearby hospital, while the third was reportedly treated on scene.

The suspect initially fled after the attack, but was located by Israeli police with the assistance of witnesses on site, al-Samri said.

Israeli media reported that the attacker was shot on scene, however Israeli police spokesperson Micky Rosenfeld was unable to confirm to Ma’an if the suspect was injured.

Checkpoints were reportedly erected on main roads leading in and out of Raanana following the attack.
Tammum — the suspect’s hometown — is located northeast of Nablus in the northern occupied West Bank.

Attacks carried out by Palestinian individuals on Israeli military and civilians began at the start of October and have continued through into December.

Nineteen Israelis have been killed in attacks and around 200 injured, according to the UN Office for the Coordination of Humanitarian Affairs.

At least 125 Palestinians have been killed by Israeli forces and settlers during the same time period, and well over 11,000 injured.

The circumstances of several deaths continue to be disputed as investigations by rights groups have revealed excessive use of force and extrajudicial killing by Israeli forces against Palestinians who had not posed a threat at the time they were killed.

Evidence has been revealed which indicates that many of the reports on knife attacks are not in fact genuine.