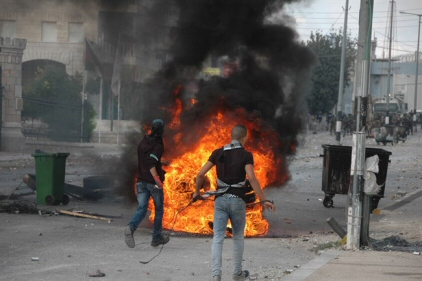 Israeli forces shot and wounded a 14-year-old Palestinian boy with live fire during clashes in the outskirts of Silwad, in eastern Ramallah, on Monday afternoon, according to medics.Ambulance crews said that Ahmad Jamal Qantawi, 14, was shot and wounded in his stomach, leg, and hand, and had suffered severe loss of blood.v

According to Ma’an News Agency, clashes broke out between Palestinian schoolchildren and Israeli forces at the western entrance to Silwad.

The boy was reportedly evacuated by an ambulance from Israel’s emergency services, Magen David Adom.

Palestinian police ordered Israeli border police forces out of the Beituniya area of western Ramallah, and threatened to use their weapons if they refused.

Security sources said that Israeli forces had been chasing Palestinian schoolchildren in the area, when a number of Palestinian police officers led by Lieutenant Akef al-Shalan arrived.

Shalan ordered the Israeli forces to leave the area and threatened to use weapons if they refused.

Large parts of Beituniya, on the western outskirts of Ramallah, are classified Area A, where the Palestinian Authority is supposed to have full civil and military authority as part of the Oslo Accords, although Israel regularly flouts this.

Video footage was later released appearing to show the Palestinian officers leading the Israeli forces away, while locals shouted their approval.

Thousands of Palestinians have been shot and wounded by Israeli forces since a wave of unrest swept the occupied Palestinian territory at the beginning of October.

The Israeli army has come under repeated criticism over its violence toward children.

Defense for Children-Palestine stated, in a September report, that Israeli forces and Jewish extremists had killed at least 1,991 children since 2000.