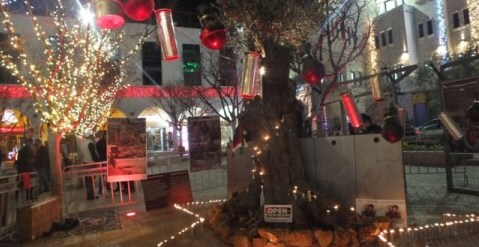 The Popular Struggle Coordination Committee (PSCC), on Monday evening, lit up an olive tree that was uprooted by the Israeli occupation in Bir Ouna valleys, Beit Jala town, Bethlehem.The tree was decorated with both oppression and resistance tools, according to the PNN; It was adorned with bullets, teargas canisters, wires, walls, and also had the Palestinian Kufiyyeh, slingshots, and photos of Palestinian children killed or imprisoned by occupation authorities.

The tree was surrounded by messages calling for an end to the Israeli occupation and lit with candles for the souls of more than 120 victims killed in only three months.

Inside the tree, PSCC planted another young tree as a representation of Palestinian hope and resilience, life emerging from the womb of death.

Head of the Popular Struggle Coordination Committee, Munther Amira, said that the tree was a witness to all massacres committed by the occupation, and that decorating it responds with a message of life:

“We planted a living tree inside the dead tree as a message for hope, to say that we will continue our struggle against the occupation and will not give up.’

For her part, Lama Nazeeh from PSCC said that Bethlehem (the famed birthplace of Jesus and the world center of the Christmas tradition) is supposed to be the land of peace but, unfortunately, it’s full of pain and blood.

“Christmas is a holy period that represents the holy spirit of the city. Bringing this tree here, which is full of resistance forms such as the wall, the imprisoned children, the flag, the teargas canisters, means a lot to the Palestinian people, because both Christians and Muslims suffer from the occupation.”

Secretary General of the Palestine National Initiative (Mubadara) movement, Mustafa Barghouthi, said that Jesus was the first Palestinian to suffer here, and now all Palestinians are carrying on his journey.

Barghouthi added: “Israel has closed down all possibilities and negotiations leaving the people with only one choice, that is resistance against oppression for the freedom, because without struggle we can’t achieve anything.’

PSCC activist Mohammad Al-Khatib said that “this tree has been killed by the Israeli wall in Bir Ouna — this wall that destroyed the land and took our resources all over Palestine. This tree is a message that we deserve to celebrate. We deserve joy and we will fight for our freedom till the last breath.’

Mayor of Bethlehem, Vera Baboun, assured the Palestinian resistance and existence in this land:

“We will always remain here, praying and working for the peace that we deserve, and work together to keep the bells ringing.

“Let them kill, we will bring life;
let them uproot, we will plant.”